Doves are elegant, attractive birds with unique personalities. Doves are known for their sweet and gentle dispositions. The white dove, symbolic of love, is the most common of over forty different color mutations of the Ringneck Dove, or Streptopelia risoria. They have peaceful expressions, gentle cooing and subtly beautiful plumage. Doves mate for life and male doves also help their female partners incubate and care for their young, which helps their image as devoted, loving birds. As doves tend to nest in areas that humans can watch and hear, the cooing sound made by the birds is linked to the sound of lovers when talking in flowery and sugary language to each other, which is when they are said to be ‘cooing’. For these reasons, doves soon became connected with innocent, romantic and eternal love. 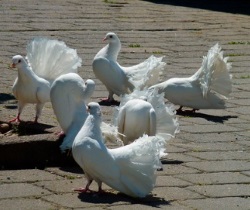 Large white doves are often released for weddings. White doves are symbolic of new beginnings, peace, fidelity, love, luck and prosperity. Releasing doves uplifts the eyes, signifies new beginnings and true celebrations in flight. The difference between feral pigeons and celebration release doves for weddings, Valentine’s day and other special occasions is that doves are carefully bred and meticulously trained so they are gentle and will faithfully return to their home loft when released in distant and unfamiliar locations.

Whether you like birds or not, most people enjoy white dove releases. White doves are symbolic of peace, love, luck and prosperity, all things that are highly desired in any relationship. Couples may release a pair or flock of doves after their engagement, which can happen on Valentine’s day, to symbolize their life together taking flight. The release of doves are not performed at night since they do not see well enough to fly safely in the dark. Also, doves will not be released in bad weather.

World symbolism of the dove 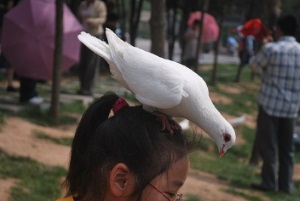 The symbol of the pure white dove transcends all cultures and traditions. Doves have been symbolic throughout the world across the centuries. Ancient Egyptians viewed the dove as symbol of quiet innocent feelings. In China, the dove has been a symbol of peace and long life for centuries.

As long as 10,000 years ago, doves were likely living in the same caves as ancient humans in Mesopotamia and used for food. Bones of doves have been found in Egyptian tombs, indicating the birds were important for funeral rites. Evidence has even been found to show that doves were sacrificed to different gods. The association of doves with Valentine’s day goes back to the Middle Ages, when people believed that all birds chose their mates on Valentine’s Day. Although some birds do mate during the middle of February, including the mistle thrush, blackbird and partridge, most birds ‘ mating seasons take place during the spring and summer.

To early Greeks and Romans, doves represented love and devotion and care for a family. The dove was the sacred animal of Aphrodite, the Greek goddess and of Venus, her Roman counterpart. These two goddesses of love and friendship are often depicted with doves fluttering around her or resting on her hand. As a love symbol, the dove conveys a higher admiration for the true value of unconditional love. Doves also represent monogamy and loyalty in relationships, qualities celebrated on Valentine’s day. In religion the dove is also closely connected to to Ishtar and to Mary, mother of Christ. 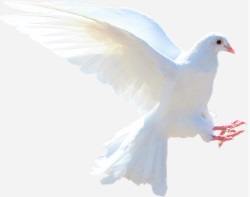 As humans spread across Europe and Asia, they most likely brought doves with them. In time, doves were not only used for food, but as their skills at returning to the same mates and nests were discovered, they were used for message deliveries. The ancient Greeks, Romans and Persians all used pigeons as message couriers. Avian messengers were popular in times of war and a number of doves received recognitions, medals and other honors for heroism and bravery in completing their duties while under enemy fire or grievously injured in the second world war.

Throughout human history, doves have featured prominently in cultural symbolism. From the dove bringing a sign to Noah that the biblical flood was receding to pigeons and doves as emissaries to the gods, doves have been noted in Christianity, Judaism, Hinduism, Sikhism and Islam, and in many temples and religious sanctuaries, doves are readily fed and accorded a place of honor. Many religious ceremonies, such as weddings and funerals, are accompanied by dove releases that symbolize peace, love and rebirth. Doves are also released at the opening ceremonies of Olympic games, a tradition that dates back centuries.

For a unique Valentine’s day gift for your girlfriend, wife or significant other, book a pair of doves to be presented to your partner with your card at your valentine’s home, place of work or any chosen venue and the beautiful heart shaped basket containing two beautiful white doves to release as a token of your love will be a memory for you both to treasure. 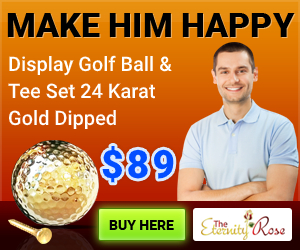